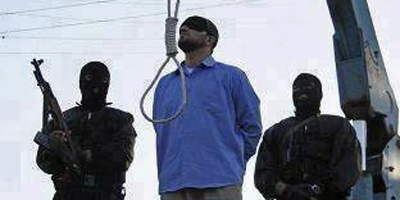 I am well aware that the persecution of Christians happens around the world. However most of the time it is faceless and nameless. I just came across the story of Youcef Nadarkhani, a Christian pastor in Iran.

Youcef Nadarkhani Executed: Christian Pastor Hanged in Iran for Being Christian
Youcef Nadarkhani has been executed in Iran. He is the Christian pastor who has been imprisoned and found guilty by the courts in Iran of being a Christian. Now he’s been executed in spite of international appeals to spare his life. He was hanged today.Youcef Nadarkhani was arrested in 2009 for being a Christian in a muslim country – specifically Iran. The 34-year-old father and husband was charged with refusing to convert to Islam. He was given the opportunity to renounce his Christian religion and refused, resulting is his condemnation and sentence to death by hanging.There is breaking news that he has been put to death by hanging because of his refusal to renounce his Christian religion and acceptance of Islam.

I am reminded that as an American I am free to be a Christian and what a tremendous privilege it is! I am also reminded that Islam is not a peaceful religion. It is a religion of the sword. Christianity is of the amazing love of God and whosoever will may come. I am challenged in two ways:

Hebrews 13:3 “Remember them that are in bonds, as bound with them; and them which suffer adversity, as being yourselves also in the body.”

Internet accountability is key for the follower of Jesus Christ who wants to live a life on guard against the ever increasing traps on the internet. Covenant Eyes provides that kind of accountability. Give it a try.