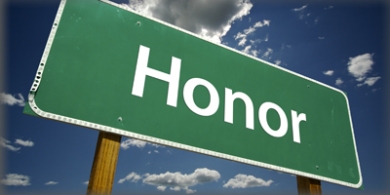 Honor with men is never more important than honor with God. I learn this truth in the fascinating story of Baalam and Balak. Balak, king of Moab, saw the Israelites, who were camping out on his borders, as a threat to the Moabite national security. He called for Baalam, a “prophet”, to come to his aid. Balak told him, “…I will promote thee unto very great honour, and I will do whatsoever thou sayest unto me: come therefore, I pray thee, curse me this people.” God’s will was clearly against Baalam going to Moab and cursing Israel. God repeatedly told Baalam “No” and once he was on his way God told him that he would only be allowed to say what God put in his mouth. Three times Baalam attempted to verbally curse Israel, but instead he blessed them. We can all take comfort in the fact that God protects His own. After Baalam blessed Israel for the third time, we hear some interesting words from angry King Balak. “And Balak’s anger was kindled against Balaam, and he smote his hands together: and Balak said unto Balaam, I called thee to curse mine enemies, and, behold, thou hast altogether blessed them these three times. Therefore now flee thou to thy place: I thought to promote thee unto great honor; but, lo, the Lord hath kept thee back from honor.” Many times honor with men means no honor with God. In fact, sometimes in striving for honor with men we actually will lose out on both honor with men and God as it was in Baalam’s situation. This may play out in your life in the arena of being dishonest on the job to please your employer, choosing not to take a stand for God among your family or friends in order not to look weird, or seeking to be something you are not to gain the praise of men. Whatever your situation, honor with God ought always be our first priority. Let’s make that commitment to God today.

You can read the story of Baalam and Balak in Numbers 22-24.

Internet accountability is key for the follower of Jesus Christ who wants to live a life on guard against the ever increasing traps on the internet. Covenant Eyes provides that kind of accountability. Give it a try.